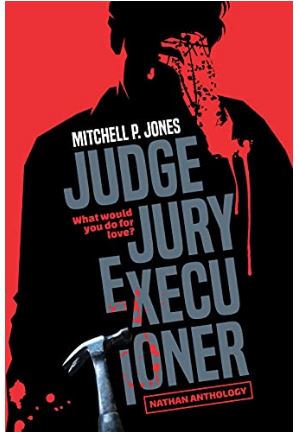 Disillusioned with a dystopian society a young teenager takes the law into his own hands to avenge his soulmate. But at what price?
What would you do for love? Or rather: What wouldn’t you do? When Nathan loses Anna — his vibrant, bursting-with-life soulmate, the one girl who completes him — to depression and despair following a vicious rape, he vows revenge against the trio of scumbags involved. Rather than waiting for a justice system he doesn’t believe in to act, he becomes Judge, Jury, Executioner. He hunts down the rapist and those who aided and abetted him hoping this will bring the Anna of old back to him. Instead, much to Nathan’s shock and pain, it has the opposite effect, driving her even further towards a dangerous precipice. Will true love be enough to set things right? One thing’s for sure: no matter what happens, true love is forever. Mitchell P. Jones presents the reader with Nathan’s cold, clear-eyed view of the world and all its faults, a place that hardly has room for love. But, in this world, it is love in the end that rises above all else, turning the coal of daily life into a sparkling diamond.