I'm Going to Kill that Cat 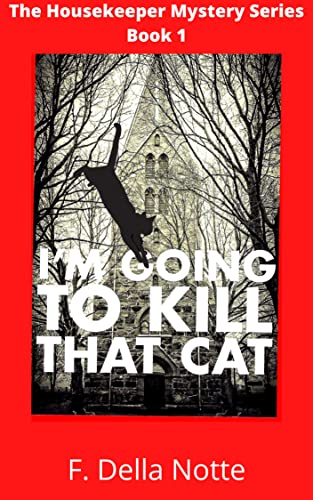 Meet Father Melvyn Kronkey, Mrs. B., and an intriguing cast of characters in Book One of the Housekeeper Mystery Series. I’m Going to Kill that Cat is the deliciously intriguing first book in the Housekeeper Mystery cozy series. If you like character-driven stories, quirky personalities, and crime-solving kitties, you’ll love F. Della Notte’s furry ball of fun.
It’s Fat Tuesday, the day before the holy season of Lent begins; it’s a time for contemplation and prayer. But at St. Francis de Sales Church in Austin, Texas, it starts with a scream.
Father Melvyn Kronkey, the pastor, let slip the handle on the kitchen door and it slams shut when he rushes out to meet the groundskeeper about trimming back low tree branches that scratch cars as they pull into the parking field.
“Must get that fixed,” he mumbles, aware that his new housekeeper, the outspoken and feisty Mrs. B., is irritated by the banging door. But her annoyance is soon forgotten. He turns his face to the gentle breeze and looks into the clear blue sky. God’s in His heaven, and all’s right with the world, thinks Father Melvyn until….
“Help, help,” screams Martha Magswelle, on her knees, in front of the church, struggling to hold Barklay’s and Smitty’s leashes. She twists and turns, barely holding on, her fury outweighing the pain. “One day, I’m going to kill that cat.” No sooner are the words shouted than Father Melvyn reaches her, and Velma Scooterman-Maxwell appears, holding her broom.
“I was sweeping my porch and saw you fall,” says Velma. “Are you okay?” she asks, her voice silky.
“Why don’t you fly away on the broom and take that stupid animal with you. One of these days, I’m going to kill that cat,” Martha howls again, rubbing her skinned knees.
Velma’s demeanor turns to ice, and the look in her eyes sends a shiver up Father Melvyn’s spine. “If you try to hurt my cat, you’ll be sorry…very, very sorry.” Although whispered, the threat is as cold and dangerous as the iceberg that sank the Titanic, and within a day, one woman will die, and the other will be accused of killing her.
Drawn into a murder that threatens to expose long-buried scandals involving the church, Mrs. B. and Father Melvyn must set aside the struggle of adjusting to working together despite their diverse backgrounds.
Motives and suspects are plentiful, but can Mrs. B. and Father Melvyn prevent the arrest of an innocent person and unravel the mystery without killing one another? Or does someone else die? Maybe one of them?

THE HOUSEKEEPER MYSTERY SERIES – Fast-paced action with twists and turns that keep you guessing until the end.