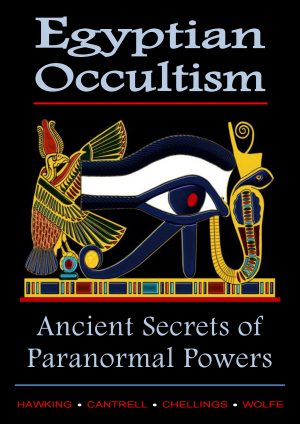 Explore the secret knowledge of an occult master of the Eighteenth Dynasty and the powers that underlie the unparalleled accomplishments of Ancient Egypt. No historical mystery has inspired the depth of fascination as the enigma of Ancient Egypt. Over ten-thousand years ago, as if sprung from the sands, a small stone-age culture abruptly rose to create perhaps the greatest civilization of known history. How was such an incredible feat achieved?

This book explores answers to that mystery through the discovery and translation of an esoteric manuscript, a creation of the great Egyptian Master Kalika-Khenmetaten, who authored her masterpiece under the patronage of the great Kings Amenhotep III and Amenhotep IV (Akhenaten) over three-thousand-three-hundred years ago. Kalika’s manuscript, examined in detail in this book, clearly reveals the profound power, knowledge, and techniques of a great master of that distant age.

Kalika’s manuscript everywhere reveals the occult knowledge of an exceptional intellect: “Energy, matter, space, time, and separation are our perceptions of reality, not pieces of it.” Over two-thousand years before Shankara, Kalika wrote of the spatio-temporal world as being an illusion; and over three-thousand years before Kant, she stated: “Space and time are not things that we perceive, but modes of perception, a framework our consciousness generates in which to cognize the world we create around us.”

“You form the fabric of your experience through your own beliefs and expectations. Your interpersonal ideas about yourself and the nature of reality directly affect your thoughts and inner images. You take your beliefs about reality as truth, and so do not question them. They seem self-explanatory. You perceive them as statements of fact, far too obvious for examination. Therefore they are accepted without question; they are not recognized as beliefs about reality, but are instead considered characteristics of reality itself. They become invisible assumptions, but they nevertheless form your personal experience.” —Kalika-Khenmetaten

Our exploration begins with Ancient Egypt, not merely because it was the setting for Kalika’s life, but because that civilization formed the background and source of the modern world. We shall be surprised to learn how much of our indispensable inventions, our economic and political organization, our science and literature, our philosophy and our art, goes back to the dawn of civilization in Egypt.

“Egypt gave birth to what later would become known as ‘Western Civilization,’ long before the greatness of Greece and Rome.” —John Henrik Clarke

From Ancient Egypt came the technology of architecture, agriculture, metallurgy, and engineering; the invention of glass and linen, of paper and ink, of the calendar and the clock, of geometry and the alphabet; the excellence and sublimity of sculpture and the arts, refinement of dress and ornament, of furniture and dwellings, of society and life; the remarkable development of orderly and peaceful government, of education; the advancement of writing and literature, of science and medicine; the first clear formulation known to us of individual and public conscience, the first cry for social justice, the first widespread monogamy, the first monotheism; all elevated to a degree of superiority and power that has seldom, if ever, been equaled since.

“It is even possible,” as Faure said, “that Ancient Egypt, through the solidarity, the unity, the disciplined variety of its magnificent achievements, its unexcelled artistic products, and through the enormous duration and the sustained power of its effort, offers the spectacle of the greatest civilization that has yet appeared on the earth. We shall do well to equal it.”

An outstanding book for anyone on a spiritual path, and/or curious about the incredible achievements of the Ancient Egyptians and the occult knowledge that underlies them. For more information, please see the description and ‘Look Inside’ feature on the book’s Amazon page. Thank you.