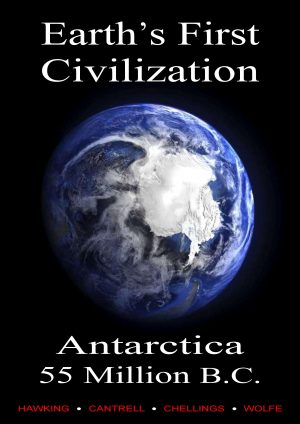 Free on Amazon September 18th and 19th, always Free on Kindle Unlimited. Explore evidence of an Advanced Civilization that existed on the Antarctic Continent in the Paleocene Epoch, and other mysterious cultures of prehistory.

For decades the archaeological community labored under the theory that human civilization began after the last Ice Age. The theory conjectured that, prior to that time, humans were no more than primitive hunter-gatherers incapable of communal organization or sophisticated abilities, and it was only after the last glacial period—following the melting of the 10,000 foot thick ice sheets that covered much of the northern portion of the world’s continents—that our human ancestors began to develop agriculture and complex economic and social structures, sometime around 4000 B.C.

Contemporary discoveries have dramatically undermined those theories. Modern research has unearthed buried civilizations and discovered hidden cities one after another—archaeology now reconstructs an unsuspected antiquity of man and paints a canvas of stunningly mysterious dimensions. Previous academic accounts of the origins of civilization have fallen forfeit to evidence from archaeological sites worldwide, including Thebes (c. 37,900 BC), Edfu (c. 18,000 BC), Turkey (c. 12,000 BC), Bolivia (c. 15,000 BC), Indonesia (c. 22,000 BC), and, most intriguingly, on the Antarctic Continent. The stunning discovery in Antarctica, if fully confirmed, will represent the greatest archaeological find of history.

Organization & Content: Part I of this book explores the true antiquity of civilization on this planet, examines the ancient traditions and theogonies that shed light on the existence and age of prehistoric civilizations, details the substantial evidence for a Paleocene civilization on the Antarctic continent 55 million years ago, and takes an inside look at recent astronomical and cosmological discoveries.

As the study of antiquity is properly accounted purely academic except as it may be made living knowledge which illuminates and enriches our contemporary life, a comprehensive Special Bonus Supplement containing Parts II and III of this book explore the extremely rare arcane knowledge of the ancient world, along with the powerful abilities that can be attained from the study of that knowledge, ones that convey benefits of great value in our modern world.

Doubtless many of the very earliest chapters of our planet’s history will lie forever silent under her most desolate soil and deepest waters, yet extant legends and traditions have been too readily set aside—academic pundits love to brand as mythical the accounts which have endured the millennia, and which mischievously persist.

We invite you to explore amazing discoveries and knowledge that for long millenniums has remained concealed under layers of legend, myth, and secrecy. A truly incomparable book for anyone interested in expanding their knowledge and personal power, and especially fascinating for anyone interested in the realities behind the ubiquitous legends of antediluvian civilizations and the possibility of ancient extraterrestrial influences. 2021 Edition, for more information, please see the ‘Look Inside’ feature on the book’s Amazon page. Thank you.