The Secret World, The Himalayan Journals of Explorer M.G. Hawking 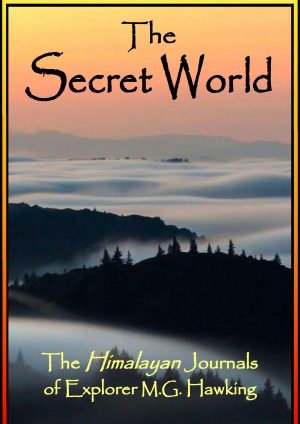 Free on Amazon September 3rd thru September 5th, always Free on Kindle Unlimited. This book reveals the compelling reality underlying historical traditions that have endured from the very threshold of history to the present day, the innumerable accounts of a ‘Secret World’ concealed deep in the immense wilderness of the Great Himalayan Range. 5-Stars: “A mysterious world. Undoubtedly, this is an intriguing read. It searches for answers to the most guarded secrets and deeply hidden mysteries of our time. Riddles that have their virtually untraced roots in the distant past of our human history.”

Years ago, on an extended trek into a closed and largely unexplored inner region of the Himalayas, in an isolated valley surrounded by vast snow fields and towering ice peaks, explorer M.G. Hawking chanced on a small village where he encountered remarkable men and women, introduced to him as masters and sages.

This anthology, The Secret World, contains detailed narratives of Hawking’s experiences, including first-hand accounts of the psychokinetic abilities he witnessed and in-depth descriptions of his discussions with the extraordinary people he met, revealing the esoteric knowledge and practices that make such extraordinary abilities possible.

Scholars relate that the first extant mention of this now legendary secret world appears in the scriptures of the pre-Tibetan Zhang Zhung culture which arose some 4000 years ago on the remote Qinghai-Tibet Plateau. Comprehensive references continue through the millennia in numerous esoteric texts: the sacred B’on treaties, manuscripts of the Kalki lore, the Puranas, the earliest texts of the Kalachakra Laghutantra (c. 500 B.C.), in the even older Kalachakra Mulatantra (c. 900 B.C.), and in the ancient wisdom traditions of civilizations throughout the Himalayan regions of Asia and beyond. The Zhang Zhung and Tibetan scriptures refer to the secret world as Shambhala I lam-yig, B’on treaties as Olmolungring, Hindu histories as Aryavarth, Chinese as Hsi Tien, and Russian traditions as Belovoyde.

This book presents incomparable narratives for anyone interested in expanding their knowledge and personal power, and especially fascinating for anyone interested in exploring the realities of the legendary secret world of masters in the Himalayan wilderness. 2020 Edition Kindle Unlimited Book. For more information, please see the description and ‘Look Inside’ feature on the book’s Amazon page. Thank you.