Teachings of a B’on Sorceress, The Ancient Powers 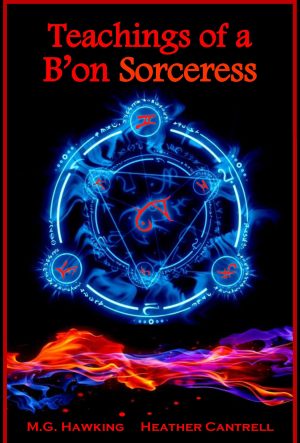 Free on Amazon August 29th thru August 31st, always Free on Kindle Unlimited. Explore this unprecedented narrative of the author’s personal experiences with a true sorceress, revealing first-hand accounts of her demonstrations of psychokinetic powers and in-depth descriptions of the secret teachings of the Qinghai-Tibet Plateau’s legendary 4000 year-old Zhang Zhung culture that enabled her to attain such extraordinary abilities.

5-star reviews: “Exceptionally well written and beneficial. Some of the most valuable meditation techniques... Thoroughly delightful to read and extremely beneficial”; “Mystifying and informative”; “The ancients knew more than us. Centuries of knowledge come to awaken your mind to much more than the everyday grind. Great things to meditate on.”

From the Author: “This book is devoted to our remarkable friend Mani Choejor, who has enriched my life, and the lives of so many others, far more than mere words can express. To say she is a rare and extraordinary young lady would be to gravely understate the case. Mani was born in a small village in Tibet, orphaned at an early age by Chinese hostilities, then adopted and mentored in an ancient B’on monastery by an abbot known to be a master of great power, one of perhaps two or three remaining teachers of the primeval esoteric arts of Zhang Zhung magic, or ‘sorcery.’ I will straightaway point out that this book narrates experiences which were wholly inexplicable in the ordinary sense. These events demonstrated Mani’s ability to psychokinetically manipulate physical ‘reality’ in a manner that is not ordinarily accepted in the Western world as part of the field of human activity or ability. The purpose of this book is to illustrate those ‘non-ordinary’ events and the knowledge that made them possible.” —M.G. Hawking

From the Publisher: For thousands of years Tibet has been a fabled land of mystery and magic. Isolated from the rest of the world by its topography and remote setting on the Qinghai-Tibet Plateau—the highest in the world, with an average elevation of over 16,000 feet—Tibet is home to the 4000 year-old culture of the forgotten kingdom of Zhang Zhung, the ancient realm of the original pre-Buddhist B’on religion. According to their own histories, B’on was founded in 16,000 BC by the earliest known Buddha-like master, Tonpa Shenrab Miwoche. Like Siddhārtha Gautama, our most recent historical Buddha, Shenrab renounced his life as a prince to become a monk, achieved enlightenment, and composed teachings that enable attainment of the highest knowledge and power. B’on incorporated Buddhist-like elements, similar to Tantra, long prior to and apart from the influence of Buddhism.

This very rare form of esoteric B’on contains huge amounts of arcane and elemental magic, in keeping with its view of the cosmos as a psycho-physical unity, able to be wholly manipulated in heightened states of awareness through clandestine techniques and practices. These esoteric teachings are founded on a profound premise: “The Universe is but a mirage which exists in the mind, springs from it, is controlled by it, and sinks into it.”

In modern terms: “As a man who has devoted his whole life to the most clear-headed science, to the study of matter, I can tell you as a result of my research about atoms this much: There is no matter as such. All matter originates and exists only by virtue of the existence of consciousness. The mind is the matrix of all matter.” —Max Planck, Nobel Laureate, originator of Quantum Mechanics

“The world is a construct of our mind’s sensations, perceptions, memories. It is convenient to regard it as existing objectively on its own. But it certainly does not.” —Erwin Schrödinger, Nobel Laureate

This book contains teachings that for untold millenniums have been known only to a privileged few, extraordinary knowledge long concealed under the most intense secrecy. An incomparable book for anyone on a spiritual path or seeking greater knowledge and personal power. A Kindle Unlimited book you will never forget. 2020 Edition, e-reader page count 372 (estimated, actual count varies depending on the reading device used). For more information, please see the ‘Look Inside’ feature on the book’s Amazon page. Thank you.