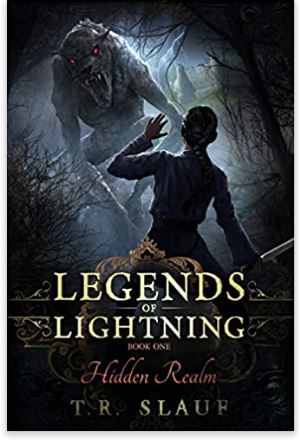 “The next Realm Walker will bring with them a storm. Lightning must fight the Crimson Shadow, or the lands will be cast into eternal darkness.”

When she was a child, Esther was plagued with vivid nightmares. Now they have returned to haunt her. Bloodthirsty monsters chase her through a forest of dead trees while a mysterious hooded figure stalks her. After waking with fresh wounds from her dreams, Esther searches for the truth about who she is and the Hidden Realm she is destined to save.

Join Esther on her journey of self-discovery as she travels into a world long forgotten. Unsure if she can trust her hooded guide, she is hunted by unknown enemies and smothered by expectations of grandeur. Deciphering friend from foe she travels the lands, trying to unite kingdoms torn by pride.

" Hidden Realm (Legends of Lightning) by T. R. Slauf gives me those shivery feelings I’d get while reading the gothic fairy tales, while also blending in the very best elements of epic fantasy and tossing in a dash of horror." Artisan Book Reviews