Sorcerers of Tibet, The Mystery & Magic 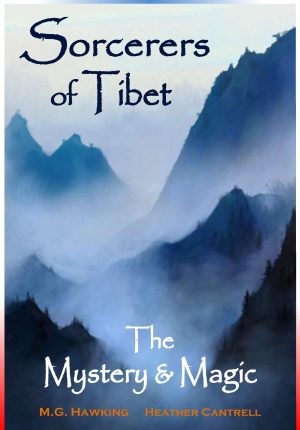 Free on Amazon August 20th thru August 22nd, always Free on Kindle Unlimited. Discover the Profound Secrets of the Ancient Zhang Zhung Art of True Magic. Transcribed directly from the field notes and journals of explorer M.G. Hawking’s sixty-two months in remote Himalayan regions of Nepal and Tibet, this book contains detailed narratives of Hawking’s experiences and conversations with a powerful practitioner of the ancient Zhang Zhung art of magic. These narratives provide unprecedented first-hand accounts of her demonstrations of psychokinetic abilities and in-depth descriptions of the apprenticeship and the knowledge that allows the acquisition of such extraordinary abilities, the ‘Four Portals.’

A group of highly esoteric teachings setting forth the true nature of physical reality and techniques of powerful elemental magic, the ‘Four Portals’ and are of extreme antiquity. The first extant traces of the teachings appear as part of the lore of the ancient Zhang Zhung culture, but they are believed to have originated far earlier. Being an exceedingly restricted body of knowledge, said to convey enormous powers, the teachings disappear from the historical record for some 2600 years, not to reemerge until the 7th century AD in the arcane scriptures of the pre-Buddhist B’on religion in Nepal.

The rare esoteric teachings of the ‘Four Portals’ contain enormous amounts of elemental magic, in keeping with their view of the cosmos as a psycho-physical unity, able to be manipulated in heightened states of awareness through clandestine techniques and practices. These teachings are founded on a profound premise: “The Universe is but a mirage which exists in the mind, springs from it, is controlled by it, and sinks into it.”

To understand this premise in a contemporary context, we may consider the following: “As a man who has devoted his whole life to the most clear-headed science, to the study of matter, I can tell you as a result of my research about atoms this much: There is no matter as such. All matter originates and exists only by virtue of the existence of consciousness. The mind is the matrix of all matter.”—Max Planck, originator of Quantum Mechanics, Nobel Laureate. “Consciousness cannot be accounted for in physical terms, for consciousness is absolutely fundamental. It cannot be accounted for in terms of anything else. Quantum physics reveals a basic oneness of the universe. Multiplicity is only apparent; in truth, there is only one mind.”—Erwin Schrödinger, Nobel Laureate. "Reality is merely an illusion, albeit a very persistent one."—Albert Einstein, Nobel Laureate.