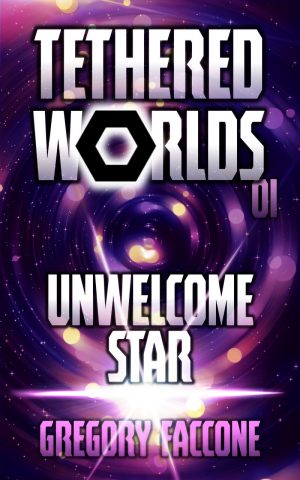 The long awaited third installment in the Tethered Worlds Series is at finally released. So there is no better time to jump into the series than now, because we are celebrating the release with a sale of book one, Tethered Worlds: Unwelcome Star. Enjoy it for the rest of this year with special introductory pricing—the Kindle version for only 99 cents!

Book one started it all. The first action-packed, emotional roller coaster ride which spawned the award winning series. Jordahk thought he was a normal guy—right up until the day the great star-spanning collectivist government tried to annex his world. Then his eccentric grandfather showed up. It all leads to an encounter with ancient but dangerous technology—dangerous to the target and the user!

Tethered Worlds book 03, Star In bankruptcy is the newest release. But before that enjoy the award winning book two, Blue Star Setting. It will continue the series in ways readers will have hoped for, but also in ways they could not have expected.