The Grand Civilization, Ancient Egypt’s Profound Mysteries: The Esoteric Sources of Their 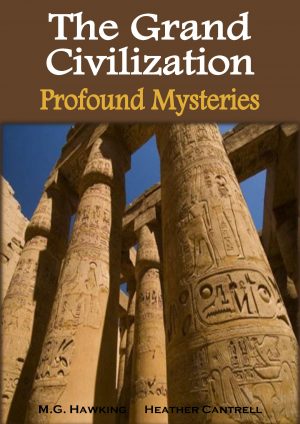 Free on Amazon July 19th thru July 21st, always Free on Kindle Unlimited. Penetrate one of the Supreme Mysteries of the Ancient Ages. Few puzzles have captured the fascination of enlightened minds so much as the incredible majesty and achievements of the civilization of Ancient Egypt. No one knows from whence the early Egyptians came, yet no people, ancient or modern, have conceived of building a civilization on a scale so sublime, so great, so grandiose, as the Ancient Egyptians.

Their technology of architecture, agriculture, metallurgy, and engineering; the invention of glass and linen, of paper and ink, of the calendar and the clock, of geometry and the alphabet; the excellence and sublimity of sculpture and the arts; the advancement of writing and literature, of science and medicine; the first clear formulation known to us of public conscience, the first emergence of social justice, the first widespread monogamy, the first monotheism, all elevated to a degree of superiority and power that has seldom, if ever, been equaled since.

“Egypt gave birth to what later would become known as ‘Western Civilization,’ long before the greatness of Greece and Rome.” —John Henrik Clarke

“Ancient Egypt, through the solidarity, the unity, the disciplined variety of its magnificent achievements, its unexcelled artistic products, and through the enormous duration and the sustained power of its effort, offers the spectacle of the greatest civilization that has yet appeared on the earth. We shall do well to equal it.” —Gabriel Faure

The ascension of ancient Egyptian civilization to a previously unknown zenith of majesty and culture lasting thousands of years demonstrated advancements that are wholly inexplicable. How did a small stone-age culture abruptly rise to create perhaps the greatest civilization of known history? Where did their unprecedented knowledge, power, and sophistication come from?

“Ancient Egypt presents us with an impenetrable mystery. How may we explain a Neolithic desert people spawning the most majestic civilization of history? Their rapid ascension from a primitive state to a previously unapproached zenith of technology and culture demonstrates advancements that utterly elude explanation. Many of their artistic and architectural productions are unequalled to this day. What could possibly explain vast technical knowledge and sophistication appearing so fully-formed so suddenly?” —Legendary Egyptologist Flinders Petrie, Archaeological Journal (1911)

For untold millenniums the truth underlying this profound mystery has been known only to a privileged few, extraordinary knowledge long concealed under layers of myth, legend and silence. Explore an opportunity to penetrate this mystery in a captivating and richly enlightening account. Discover extraordinary revelations long concealed in myth, legends, and secrecy. A Kindle Unlimited Book you will not forget. 2020 Edition, e-reader page count 332 (estimated, actual count varies with the reading device used). For more information, please see the description and ‘Look Inside’ feature on the book’s Amazon page. Thank you.