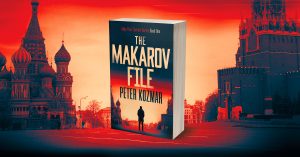 He’s fallen from grace. Will this high-stakes contract restore his status… or prove he’s lethally expendable?

Washington, D.C. Former CIA agent Andy Flint has hit rock bottom. Broke, divorced, and facing a court case for a drunken bar brawl, the bottle is his only friend. So he seizes the chance to rebuild his career when his old bosses pull him in to investigate a series of calculated killings in Russia.

After landing in Moscow, Flint discovers the slain operatives are linked to mysterious disappearances of powerful oligarchs and the Russian mafia. And as the widening conspiracy threatens to swallow him and his partner whole, the disgraced spy uncovers shocking clues that could point to a mole in the ranks.

Will the troubled man’s shot at redemption end with him catching a bullet?

The Makarov File is the gripping first book in The Andy Flint Thriller Series. If you like flawed heroes, intricate plots, and edge-of-your-seat action, then you’ll love Peter Kozmar’s rollercoaster ride.

Buy The Makarov File to poke the bear today!