Playing for Keeps by Therese Allison 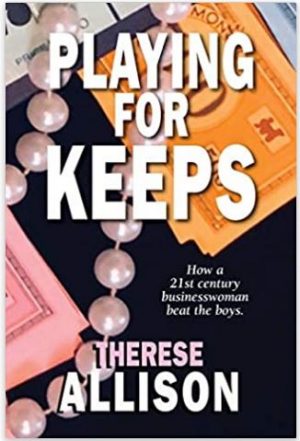 Playing for Keeps: How a 21st century businesswoman beat the boys by Therese Allison

All her life, Therese Allison wanted to beat the boys – from the playground to the boardroom. She became the first female producing Partner in an insurance brokerage company tied to Lloyd’s of London where, for 300 years, women weren’t allowed on the underwriting floor. In Playing For Keeps, Ms. Allison shares her pearls of wisdom that created the framework for success, not only for her, but for her children.

Playing for Keeps by Therese Allison is a must-read for anyone wanting to understand the mind-set of a groundbreaking pioneer of female executives. Fascinating and refreshingly open and honest, this is a biography of a successful businesswoman you won’t want to miss!