For a Hundred Centuries, from her Sacred Seat the Cat Beheld the Greatest Civilization of History 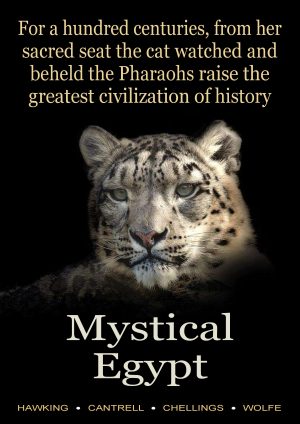 Free on Amazon 04/06 - 04/08/2021, always Free on Kindle Unlimited. Explore history’s most magnificent civilization and its profound mystical knowledge. For centuries, devoted scholars have endeavored to penetrate the mysteries of Ancient Egypt, the stone-age culture that abruptly rose to create the greatest civilization of known history.

Champollion, founder of Egyptology, was the first of a thousand such men and women, living simply in the heat and dust, trying to read for us the riddle of the achievements of a mysterious civilization, to snatch from the secretive soil the science and technology, the art and literature, the history and wisdom of Ancient Egypt. By its side Sumeria's culture was but a crude beginning; not even the culture of Greece or Rome would surpass it, far less our own.

How did a small community just emerging from a Neolithic stage suddenly generate the most majestic and enduring civilization of the ages? The ascension of Ancient Egypt to a previously unknown zenith of culture lasting thousands of years demonstrated advancements that have long eluded explanation. The civilization of Ancient Egypt formed the background and source of the modern world. We shall be surprised to learn how much of our indispensable inventions, our economic and political organization, our science and literature, our philosophy and our art, goes back to the dawn of civilization in Egypt.

From Ancient Egypt came the technology of architecture, agriculture, metallurgy, and engineering; the invention of glass and linen, of paper and ink, of the calendar and the clock, of geometry and the alphabet; the excellence and sublimity of sculpture and the arts, refinement of dress and ornament, of furniture and dwellings, of society and life; the remarkable development of orderly and peaceful government, of education; the advancement of writing and literature, of science and medicine; the first clear formulation known to us of individual and public conscience, the first cry for social justice, the first widespread monogamy, the first monotheism; all elevated to a degree of superiority and power that has seldom, if ever, been equaled since.

The voluminous lore of ancient Egyptian tradition relates that in the antediluvian time of zp tpj (generally transcribed as Zep Tepi), the “first occasion" or “first time,” mysterious, highly enlightened “gods” appeared in Egypt, bearing previously unknown technology and knowledge. The texts inscribed on the walls of the Temple of Edfu in Upper Egypt contain explicit descriptions of the time of Zep Tepi and the coming of the "bringers of knowledge," recounting their arrival in a “cosmic egg” radiating colored light, bearing the “gods” who brought the gift of civilization to Egypt, the primary of which was Ptah, whose rule, the texts tell us, began circa 18,000 BC.

Plato (c. 428-348 BC) writes that Egyptian priests kept records of their history going back over 19,000 years: “Egypt has recorded and kept eternally the wisdom of the ancient ages, all coming from time immemorial when gods governed the earth in the dawn of civilization." Herodotus tells us that when Hecataeus of Miletus (550-476 BC) boasted to the Egyptian priests that he could trace his ancestry through fifteen centuries, they quietly showed him, in a hidden sanctuary deep under the sands, the statutes of 345 high priests, each the son of the preceding, making 345 generations since their "gods" had appeared in the Nile valley and marking a timeline extending back some 190 centuries. Who were these mysterious gods? Why did they come, and from where?