The Good & The Evil 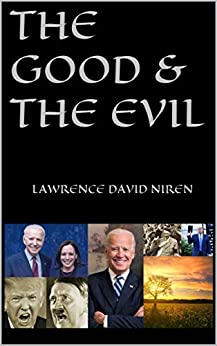 The Good & The Evil is the latest novel of the author Lawrence David Niren, published in late November 2020, that is a gripping and devastating depiction of the 2020 election between the wonderful, good, and honest Christian Vice President Joe Biden, who has a deep belief, faith, and love of the Lord, with his Vice President candidate, the wonderful Senator, Kamala Harris, and the racist, rapist, corrupt snake oil salesman con man, atheist, psychopath liar, and cockroach, the Donald, who is also so incompetent, and so moronic and delusional, that the author was forced to put in humor into the novel as well, as the Donald’s evil actually comes out in the form of Lucifer; while at the same time, the Lord and two of His angels and two of His prophets, visit Biden and protect him from the Donald, and inspire Biden to become President, as the terrible and deadly pandemic grips the country and the entire world, with the Donald, who is supposed to be President, not caring in the least that over 11 million human beings have so far caught the coronavirus, and 250,000 people have died, just in the United States alone, which is the worst in the world, with the Donald doing nothing about it, other than terrorizing the country with his zombie deluded Republican conservative worshippers and corrupt Republican Senators, Congress people, and governors, worshipping the Donald at his feet, and actually proclaiming him to be their god and idol, and going after good people of color and minorities, of African Americans, Hispanics, Muslims, Asians, and even Native Americans, and cheering on the racist evil police who continue to choke, shoot, and kill people of color like they were insects to be crushed, with the Donald and his White Supremacists, Nazis of America, and Ku Klux Klan leading his white worshippers cheering him on as the law and order President.

This story is the ultimate battle of good vs. evil, or as President-elect Biden explains, it is “the battle for the soul of the nation”, with the Lord and His two angels and two prophets leading the charge for good with Biden.

Vice President Kamala Harris has a copy of The Good & The Evil as an ebook.