RITE-OFF: A Gripping International Thriller for our Times 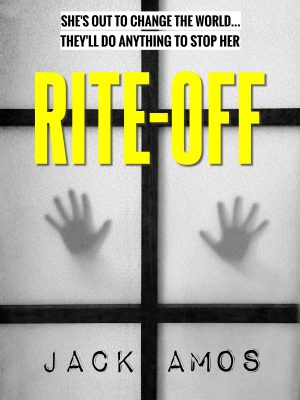 She came from nothing. Clawed her way to the top.
But internet genius Shona Gladstone has vanished. On the very eve of hosting secret talks which could change our world.
And days later, police have found only her car, a mangled wreck in the mountains. No sign of a body. And still no ransom demand.
When social media is suddenly flooded with shocking images of her as a drug addict, it's up to Detective Inspector Barney Mains to untangle fact from fiction and find her.
For she's the game-changer, the disruptor with a plan to transform the lives of millions and end the rampant inequality which threatens to tear western society apart.
When the killing starts, Barney suspects that he could be up against men of power who'll stop at nothing to keep things exactly as they are...
This fast-paced story follows stand-out characters through maze-like twists and turns. It's an international thriller, murder-mystery and political thrilller in a time of great social change.
But ultimately it's a story of hope, the belief that lives and times can change…

What readers are saying about RITE-OFF:

***** - "From Edinburgh to the Riviera this book had me enthralled... great characters... kept guessing to the end" - Reviewed on Amazon.co.uk

***** - "Intriguing Thriller on the Cote d'Azur. A most enjoyable mix of thriller, politics and good food as two police detectives from Edinburgh try to solve a mystery whilst enjoying the delights of the Cote d'Azur" - Reviewed on Amazon.fr

SYNOPSIS:
A disenchanted Scottish detective is sent to the South of France after internet billionaire Shona Gladstone goes missing from her palatial villa.
Detective Inspector Barney Mains finds a super-rich elite untouched by waves of virus which have devastated the rest of the world - and a French police force only going through the motions.
Then the mangled wreck of her car is found on a mountainside, leading him and his sparky new sidekick DC Ffiona McLuskey to question how it got there - unseen by the web of cameras spun across the entire region.
There's been no ransom demand, raising the possibility that Gladstone may have staged her own very elaborate vanishing act. If not, then someone has gone to an awful lot of trouble to get rid of her.
Suspicion falls on a trusted member of her inner circle. Barney and Ffiona, now working closely with dapper Capitaine Jean-Luc Verten of the Police Nationale in Nice, are shocked that their suspect may be linked to certain powerful politicians.
Surely such prominent figures could have nothing to do with the disappearance.
Unless she posed some kind of threat to the prevailing order...
When murder raises the stakes the shattering truth finally emerges, leaving Barney with a terrifying choice.
And his decision could shake the foundations of the Western world.