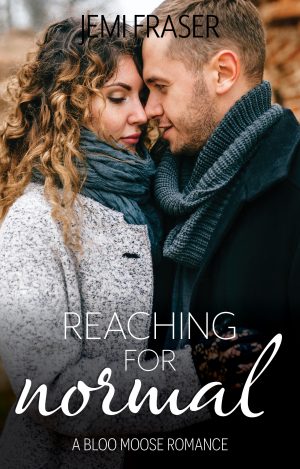 Freelance writer Myla Esperanza wants to learn all things winter but landing in a ditch before reaching her destination wasn’t in the plans. Neither was being a damsel in distress. Although the man who gets her and the car out of the ditch in less time than it took her to put them there is more Grumpy Recluse than Prince Charming.

Sawyer Banks only does the winter guide thing to prove to his sister he’s still a functioning member of the human race. He’s not but the former SEAL isn’t ready to hurt the only family he has left. He’d rather spend time with the wolves he’s helping to reintegrate but the sexy little pixie with the titanium attitude he yanked out of a ditch keeps dragging him out on another of her adventures.

When those adventures turn deadly, Sawyer and Myla have to learn to trust themselves and each other if they’re going to get out of the woods alive.

Reaching For Normal is the first book in the Bloo Moose Romance series. Each book can be read as a standalone. The book contains some strong language and sexy times. Enjoy the read!