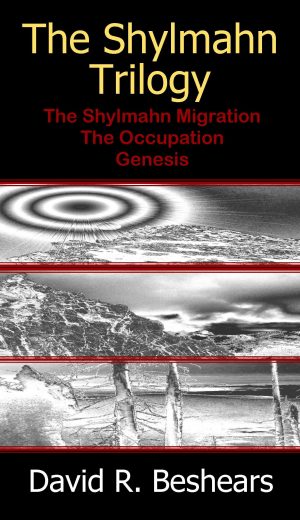 The Occupation
The invasion had ended long ago. The remnants of humanity survived as best they could on reservations or in tiny communities out of sight of the masters of the planet. Most had never known a world not dominated by the Shylmahn, content now to live out their lives in the shadows.

The Britton Family, legends from an all-but-forgotten war long since lost, fading into the obscurity of a human history soon to vanish, they now fought a war that no one knew was being waged.

Genesis
A tenuous truce between Shylmahn and Human had kept the peace for more than five years, but there was never a doubt as to who were the masters of the planet. Earth belonged to the Shylmahn.

But the Britton Family, waging a clandestine war with the invaders for thirty years, had one last desperate, insane plan to get their world back. Succeed or fail, it would change the face of the planet forever.

Praise for “The Shylmahn Migration”: