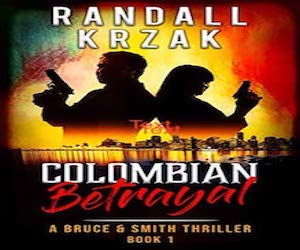 Colombian Betrayal tears the cover off the drug trade and exposes the death, and violence behind the twisted connections between governments, revolutionaries, terrorists, and drug lords.

Watch as an unholy alliance is formed when the profits of a Columbian drug lord Olivia Moreno, begin disappearing and deadly new international competitors appear on the horizon.

Moreno, head of the Barranquilla Cartel, strikes a deal with the Revolutionary Armed Forces of Colombia (FARC). Little does she know she is signing her own death warrant! FARC has a group wanting a foothold in South America—the Islamic State, and she is in the way.

On the run, Moreno is captured by a CIA team. She spins a tale to use her money and manpower to destroy ISIS in an effort to save herself. Laws and rules of engagement are meaningless to Moreno, her life and her family are her only concern. Will the CIA leader fall for her offer?

Will team leader AJ Bruce strike a deal to turn the tables on Islamic State? Can she stop them from launching an attack on the United States? Or will she be too late?

Is it worth trading control of Afghanistan’s poppy fields with Moreno as a reward for her cooperation? Or is Bruce playing her in an attempt to double-cross her and kill two birds with one stone?

Get your copy today, and watch this high stakes game of kill or be killed.