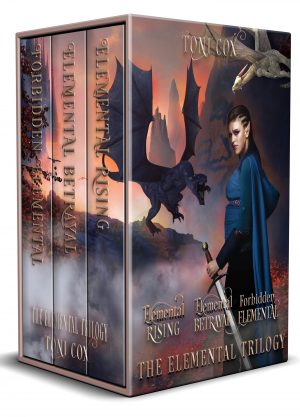 Dragons, Elves, and Magic. What more could you want from a fantasy trilogy?

Maia returns home from a stay of absence to complete her final test to become an Elemental, only to find her world in chaos. Suddenly faced with responsibilities she thinks she is not ready for, a love she does not reciprocate, and a threat to her people that might kill them all, she may be forced to become what she was born to be – a Prime.

An army more terrible than the nation of Grildor has ever had to face has invaded the lands and is killing the Elves by the thousands. Lord Longshadow invokes the Rule of Kings and gathers the forces of Greater Grildor to their aid.

Maia, aided by her dragon Midnight and the mysterious Death Elemental, seek help of their own. All the while, Maia and Blaid must come to terms with their opposing powers and the disaster it could spell for their entire world.

The race is on to save the planet of Elveron from the invading forces. Will they be in time to stop their total annihilation?

“I fell in love with this world and its characters and became utterly invested in their trials and tribulations. Toni Cox has a wonderfully rich imagination and brings Elveron and the Elves, and Midnight the dragon, to glorious life. Utterly entrancing.”