The Adult-Alien in the Delta 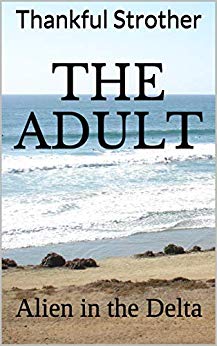 Alien in the Delta Series (3 Book) by Thankful Strother is about self-help, determination, and life lessons. They highlight different periods in the author's life; The Child, The Soldier, and The Adult.

Thankful Strother's story of his life experiences is moving and profound. He does a remarkable job of bringing the reader into his world. While reading his stories, you will feel like you are in the room with him as he shared the details of all his adventures. Series is an account of personal growth and approach to changing life situations as they occur. What is going to happen next with the family relationships, the military, interracial romance, unimaginable obstacles, and successes? Thankful tells what happens with humor. Everyone will relate to something in the series, and it is very entertaining and easy to read.

The Adult-Alien in the Delta is the third book in the series. After returning to the United States from Germany he and his German wife settled in Detroit. They bought their first house and started a family. Thankful goes to work in the automotive industry. Attending vocational school at night and weekends learns computer programming. Enters the corporate world and becomes a successful manager and later becomes a real estate investor. He shares with you a variety of emotions, including fear, sadness, happiness, and amusement.

(Following is an excerpt from The Adult about the 1967 Detroit Riots.)

Off in the distance, you could hear the sound of automatic weapons firing late into the night. It reminded me of Fourth of July firecrackers all going off at the same time. The noise was deafening. Silence for a few minutes, and it would start all over again. Each subsequent time, it would seem to get louder. That is where the similarity with the Fourth of July ended.

Detroit was burning, and there weren't enough policemen, firemen, or equipment to put out all of the fires and arrest all of the looters. We heard the sound of fire trucks and police sirens and someone speaking on loudspeakers. The smell of smoke from the fires that had been set all over the city left you wondering how long it would be before the worst of the riots would reach our side of town.

Things had gotten so out of control, and the Detroit police could not contain the riots. The Michigan National Guard had been activated but wasn't able to make a difference. There was some talk of calling up reserve military personnel. When the riots broke out in July of 1967, my greatest fear was that I would be called up for active military duty as a reservist. I was eligible to be called until November 1967, two years from the date of my discharge from the US Air Force.

The mayor of Detroit asked for help from the federal government. The Eighty-second Airborne Division soldiers were sent to Detroit to stop the rioting; the same group of soldiers who had been fighting in Vietnam. It was dangerous, scary, and unbelievable. These soldiers patrolled every street in Detroit.

I had spent four years in the US Air Force, and during that time, I hadn't seen any combat, but back in the city of Detroit, I was living in a combat zone. As the soldiers walked past our houses, we offered them something cold to drink. They had been told not to get into discussions with the citizens and to keep moving.

The entire city was under a curfew. Everyone was asked to stay put until further notice. You were allowed to go places in the daytime, but you could not travel after dark. Things didn't calm down for a solid week. Not before forty-three deaths, eleven hundred injuries, and over seven thousand arrests had occurred.