The Last Stand (Empire of the Dragon Gods Book 0) 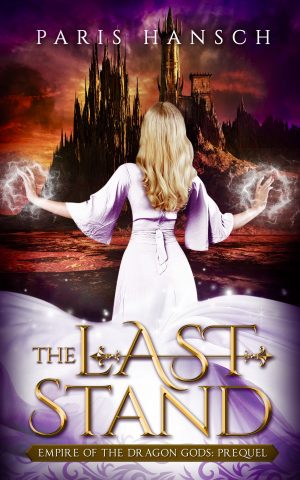 A priestess, a dragon god — and a lie that threatens to destroy them all.

Celia is about to break her vow.

As the head priestess of the most powerful dragon temple in the empire — Celia is a shining example of knowledge, purity, and unquestioning loyalty to the imperial couple, the legendary dragon gods themselves.

Sworn caretaker of their citizens, the priestesses must awaken the power of the spirit arts in others and guide the next generations.

But all is not what it seems. Everything they’ve been taught, everything Celia knows, is wrong.

Following Celia’s disastrous visit to the capital, she is trapped amidst a chaotic scheme that spans over a thousand years beyond her lifetime... and now she is faced with the ultimate betrayal.

Her Imperial Highness seeks to destroy Celia and her people — the very same people who serve her empire without question.

As the other dragon temple’s refugees pour in, Celia is forced to decide where her loyalties lie.

Will she make a final stand against a dragon god and protect her family, or will her loyalty to the gods last until her final breath?

The Last Stand is a prequel epic fantasy novella to the Empire of the Dragon Gods Trilogy with Book One — The Dragon Princess coming soon. Sneak peek inside!