The Soldier - Alien in the Delta 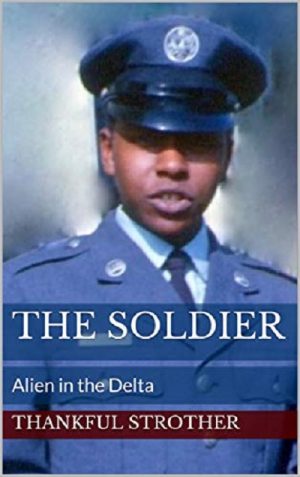 The Soldier covers the experiences of a young man from the segregated south that joined the US Air Force and spent four years in Germany. You go through basic training marching along with him and the men. After completing basic training he and several members of the armed forces went to a Texas restaurant to eat. The waiter took the orders from the white servicemen, but not him. He and another black serviceman were asked to go out back and order their food. Told they wouldn't get served inside the restaurant. This incident with racism left a life long impression because the US Air Force uniform he wore showed he would give his life for the countryman that would not serve him.

Thankful takes you with him to his base in Germany. His discoveries and adventures are exciting, humorous, and enlightening. While in Germany, he learns to speak German, and this changed his life forever. He met his future wife translating for a group of servicemen that could not speak German. You feel part of his life throughout that time in the service, and also as your guide through Europe.

Alien in the Delta (3 Book) Memoirs by Thankful Strother are about self-help, determination, and life lessons. They highlight different periods in the author's life; The Child, The Soldier, and The Adult.

Thankful Strother's story of his life experiences is moving and profound. He does a remarkable job of bringing the reader into his world. While reading his stories, you will feel like you are in the room with him as he shared the details of all his adventures. Series is an account of personal growth and approach to changing life situations as they occur. What is going to happen next with the family relationships, the military, interracial romance, unimaginable obstacles, and successes? Thankful tells what happens with humor. Everyone will relate to something in the series, and it is very entertaining and easy to read.

Alien in the Delta by Thankful Strother is a memoir filled with excitement, humor, and 1960 history that's enjoyable to read. You are taken back in time allowing you to compare some aspects of the deep-south fifty years ago to today; on a journey that highlights the life experiences of a boy from the age of six through manhood. His escape from the Delta not realized until he traveled abroad. He shares with you his intimate feeling, exposing you to a variety of emotions including fear, sadness, happiness, and amusement.

Alien in the Delta available in paperback online and at most book stores and also offered as a (3 Book) Series that highlights different periods in the author's life; The Child, The Soldier, and The Adult. https://www.amazon.com/Thankful-Strother/e/B00AX5USJU.

Biography
Thankful Strother born at Grand Lake, Arkansas in 1943, graduated from high school in 1961 and joined the US Air Force Stationed in Germany for four years where he learned to speak German and met his wife, Barbara. They married in 1966 have two adult children and live in California. After a thirty-five-year career in computers and telecommunications, retiring in 2003, he accomplished a goal to write a book about his early life. Alien in the Delta is that book.