Have Teeth, Will Bite - In the 1880s, attracting the wrong type can be undeadly 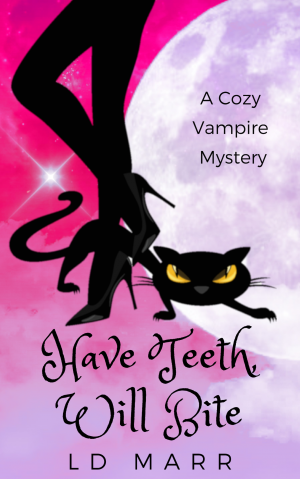 When Roz is reported to a witch hunter for talking to her cat, the prim and proper Salem librarian leaves town in a hurry. She doesn't have many options, so she takes a job as a dance hall girl in the wild west.

One of the girls is murdered, and Jonah, a reserved but hunky deputy, suspects the local vampire. But Roz knows it wasn't him. She was with him at the time being turned into a vampire against her will.

Roz wants to get closer to Jonah. But to find the real killer, she'll have to cozy up to the saloon's rough and rowdy customers instead. Being a vampire might be some protection from the murderer if the method of death wasn't a stake through the heart.

Prologue from Have Teeth, Will Bite:

The tavern door blew open, letting in chill wind and an even colder customer. Natasha, a voluptuous blonde spilling out of a lightweight black cloak, stepped in. The door slammed shut.

The bartender looked up and frowned. He met Natasha's gaze across the smoky, dim-lit distance. Then he turned away fast and began furiously wiping the rough wood bar.

Natasha sniffed the air, and her red lips curled up. She wove toward the bar through mostly empty tables with a strange sinuous grace for a woman so large.

When she reached one end of the bar, Natasha began to walk along its length. One by one, she scanned the occupants of each stool. In turn, they met her eyes, and she moved on, leaving the mark of varying degrees of nervousness or fear on their faces.

Finally, Natasha found an appealing target. She stopped at the side of a young pale-haired man. A roughly dressed workingman--big-boned, baby-faced, and reeking of innocence and purity. Natasha glanced once at the older man on the next stool, and he silently vacated it.

She sat down and tossed off her cape, drawing the young workman's eyes to flowing blonde curls that brushed overflowing cleavage. Her impossibly tight girdle created an hourglass figure with a tiny waist. Not having to breathe had its benefits.

Natasha stared into the young man's eyes. He seemed nervous, but he couldn't break away from her gaze. His pale skin became paler and somewhat clammy. She heard his heart rate speed up, and his breathing become fast and shallow.

“Sam,” he answered in the toneless voice of a person under compulsion.

Natasha rose from her stool in one smooth motion and glided out of the bar. She didn't stop to pick up her cloak from the floor. It was just a bothersome disguise anyway. Natasha didn’t feel the cold, but her husband, Dr. Vandergreest, insisted she wear it. Why go to so much trouble anyway? It wasn’t as if these people had the power to do anything to her even if they suspected what she really was.

Her husband’s tiresome rules were hard to live with--or be undead with--so much of the time. Was it any wonder that she needed a little fun in the evenings?

A black carriage waited in front of the tavern. The black-cloaked coachman and two enormous black horses blended into the night's dark shadows.

On Natasha's approach, the coachman climbed down from his seat and opened the carriage door. Sam had followed her out as commanded. Natasha turned to him. Sweat dripped down his face in the icy-cold London night. She lifted a pale, shapely arm and gestured toward the complete blackness within the open carriage.

"Get inside. I hunger!" she ordered.

Now Sam began to moan, but his feet took slow, shaking steps forward as if against his will.

Finally, after a most annoying delay, he climbed the steps to the carriage and got in. Natasha flowed up after him, and the coachman shut the door behind her.

In comfortable chair by the fire, Dr. Vandergreest waited with tireless patience for his wife’s return. Just after 3:00 a.m., he heard her enter the door to their townhouse, two floors below. When he heard the sound of her attempting to creep past his sitting room, he called out to her.

“Ah, my dear, you have returned. I have not seen you these long hours. Please join me for a few minutes before you retire.”
A pause in which he knew she was trying to think of some excuse. The ever-so-light sound of wiping. Then the door opened, and her beautiful blonde head peeked through.

“Come in, come in. I would see your lovely face this night,” the doctor insisted.

“Tut, tut. There is blood on your face again, my dear! And it is the blood of the innocent!”

He sighed a huge sigh.

“I thought we had reached an agreement about the need to control your cravings. That you understood that preying on the pure of heart draws attention--negative attention that might be hard to deal with. But it appears that you have turned a deaf ear to reason.”

“I have grown sick of your rules!” Natasha answered with spunk and defiance. “I am a powerful being, and I will take what I want. And what I do not want is the foul-tasting nasty blood of evildoers and criminals. I hunger for sweet delicious blood! Why should I starve myself because you are a coward?”

“But my dear,” answered the doctor, “you are certainly not starving. You are consuming much more blood than you need.”

“Huh! How dare you!” Natasha sputtered and fumed.

“Hark!” said Dr. Vandergreest. “I hear the shuffle of many feet approaching, the sound of shouts, the crackle and smell of burning torches!”

The base of a felled tree boomed against the downstairs door.

“Au revoir, my darling,” said Dr. Vandergreest.
Then he lightly kissed her lips and disappeared.

Other books by LD Marr

Horror on the darker side:

Tenderloin - In the dystopian near future, there are two classes of people—the users and the used.

After having psychic experiences, a former drug addict returns to the New York dance club she hung out at in the past to hunt a kidnapper. A hot but wrong guy distracts her from her search.


Talking cat stories on the lighter side: